Roelofarendsveen station is an interesting compact station building that accommodates various functions. So there is at the groundfloor. among other things a waiting room and on the first floor a home for the station manager. Also on the groundfloor. there is a compact designed goods storage, with both a door on the street and platform side.

For most people, Roelofarendsveen is known for the traffic jams on the A4, near Leiden. For the connoisseurs it will be known that nowadays the high speed line between Rotterdam and Amsterdam enters the Groenehart tunnel not far from Roelofarendsveen. However, the village has also known other times. Without a motorway and with a train connection that is functional for Roelofarendsveen, operated by the HESM, between Leiden and Hoofddorp.
However, this train connection and the associated buildings and other infrastructure had a short life. Because although solidly built for life around 1912, the station building was already demolished in 1938.

Yet the past history comes back to life in the Markenburg model. Roelofarendsveen train station is available in both the scale 1:160 (N) and 1:87 (H0). More information can of course be found on the product page . 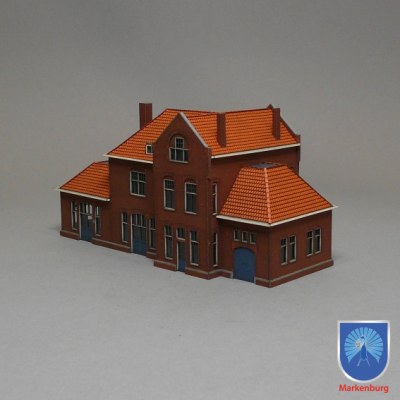