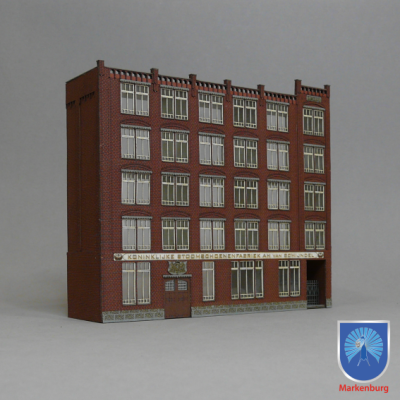 Background information:
The Noord Brabant town of Waalwijk has been known for decades for the many shoe factories that were located there. It is not surprising that the Van Schijndel family had a steam-powered shoe factory built on the Stationsstraat around 1910. It is noteworthy that the complex's 5-storey high-rise building dominated the local “skyline” until 1972. Behind the high-rise buildings have been regular factory halls which, after the company was closed in 1965, provided shelter for a do-it-yourself market for years. The upper floors of the building have been empty for a long time, while the ground floor has been used by various retail outlets. A lot changed around 2010. With the exception of the facade that was declared a protected cityscape, the entire factory complex made room for apartment buildings. With the special situation now that modern apartments have a facade of what was once a shoe factory.

Architectural details:
Executed in robust masonry, in cross-bond, additional attention has been paid, in particular, to the facade. This can be seen in the brick segment arches and brickwork details along the eaves, the decorative serrations in the concrete slates, the concrete plaque at the top of the façade with the year 1910 and the tile tableau that still carries the text “Royal steam shoe factory A.H. van Schijndel ”. The facade of the high-rise is characterized by a highly repetitive orthogonal structure, which is alternated on the right by something that can best be described as an inconspicuous tower. This has a gate at the bottom that still provides access to the private area behind this building volume. The plinth of this facade has changed the most over time. Where originally a set of sturdy wooden doors formed the entrance, flanked by a few large windows, there are now shop windows down to the floor with a few hardly noticeable entrances. Markenburg focused on the situation around 1912 when developing the model. 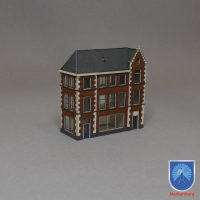 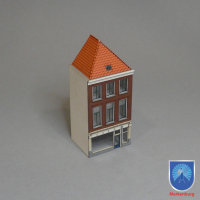 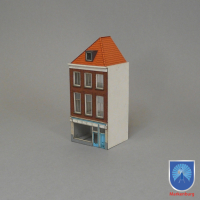 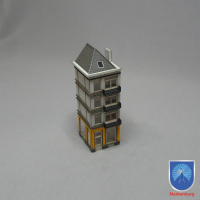 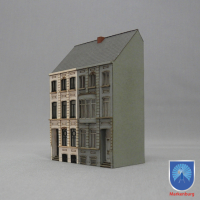