A time when steam powered machines did a lot of work.
By 1900 the steam drive had found its way in almost all possible powertrains and therefore also in a dairy factory in the Dutch town of Erp. Those who want to imagine a sketch of the era think of steam trams, steam trains and even horse and cart on the streets and paths. There were hardly any cars and trucks in the rural areas. The milk from local farmers was brought to the local dairy, where the milk cans were transferred to the loading bay. The factory turned it into fresh products for the "citypeople" in the region. Bulk quantities and long-distance transports were not yet there, because the shelf life of the products was more limited than nowdays with modern methods and additives.

Architecture.
In the years when plans came up to build the Erp steam dairy, the rise of various appealing architectural movements was known. Like from the architect and first known urban planner in the Netherlands: Hendrik Petrus Berlage, but also of the Delft and Amsterdam schools. Even the American architect Frank Lloyd Wright, who was considered particularly modern at the time, inspired many Dutch builders. What was made in the Netherlands, inspired by these influences, has become known as the '20s and' 30s architectural style. The cocktail of inspirations was not only used at that time, for the construction of the steam dairy, among other things, but is again extremely popular in Dutch residential construction in this new century.

Constant factors in changing times.
In 1916, the gabled roof tower was built along with the main building and the loading platform to the right. The success of the dairy already led to the first extensions in 1925, including the small tower. The buildings directly behind the main building are from around 1935. However, the same increasing growth trend meant that the factory had to close around 1955, because it was overtaken by factories that grew even faster. However, the building was not demolished. In the decades that followed, the building housed a variety of companies and shops. The transport company that became owner of the building in 2012 decided to renovate the building thoroughly. Economically, demolition and placing a new construction would have been cheaper. Effectively, this happened with the two rear halls. But it can be said without a doubt that the imaginative architecture of the 1920s and 1930s, in combination with the craftsmanship of the builders of the time, have retained the main part and character of the building. Now, more than 100 years after its original construction, the steam dairy has long since stopped producing dairy products using steam-powered machines, but the building is still the same striking landmark in a constantly changing world.

The model
The Markenburg model of the steam-dairy fits perfectly into the Venneweg theme, which includes more 1920s and 1930s architecture. The compact size (for factory concepts) makes it an ideal element for a model railway or scale model layout. Although the big example is in a village, the building would certainly look good in an urban situation. Whether it is workers who unload a horse-drawn cart onto the loading bay, or the shoppers who come to a well-running bicycle shop, regardless of the time frame that is pursued, the dairy is always a grateful object for various scenes.
Markenburg has kept to the situation around 2016 when modeling. For those who like to mimic a pre-war situation, the air conditioners do not have to be placed on the flat roof and one can remove the stair railings from the current landing so that it will become a propper loading dock again.

More information about the Steam-dairy can of course be found on the product page:
Theme: Venneweg > Steam-dairy


Searching on a specific scale is easy with the filter options on the main page of the Markenburg webshop . Scroll down and enter to the left below the desired scale. Then press "apply filter". 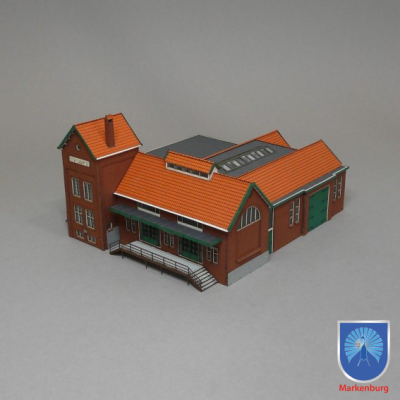 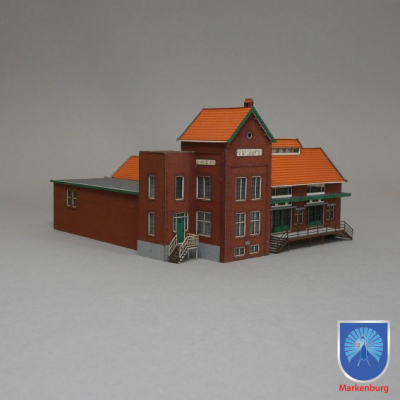 Monumental frond end of the building 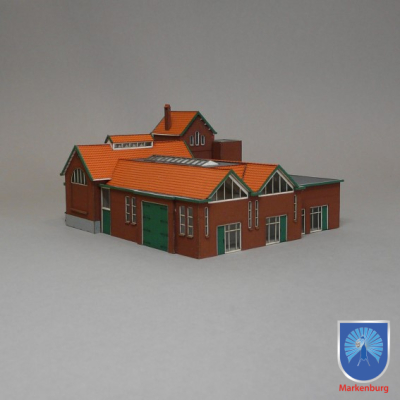 The rear of the steam-dairy building