In 1899, the design and construction of a stately mansion on Stationsstraat in Valkenswaard,(The Netherlands) with house number 1, started. At Markenburg we have chosen to take that situation as the starting point for what will be known to us as Grotestraat 1.
More than 120 years later, the real situation has changed considerably. Since 2002 the building has become a national monument, which can be found with number 518660. The building is now located on the Leenderweg. A relatively small change because only the street name has changed.
The building function is no longer a general practice with a home for the doctor's family, but has been a notary's office for several decades. As a result, the residential function has ceased to exist. Minor changes have also been made to the building. For example, a chimney at the back of the building has been partly removed, with a large capstone blunting the remainder. And where once there was a window, a door has now been realized, including a brick staircase and ramp for the disabled. Also even smaller changes have been made over the decades, whereby we have investigated what that must have been like in 1900. For example, the glazing beads of the roof glass were changed around the year 2000, during replacement work on the glass. And the basement window was renovated around 1920 and fitted with a hatch. The name of the building is now painted in graceful 1920s style letters on the facade. But the original blueprints show a different name, on a tile tableau, in a different, lower part of the facade.

This is where it often gets interesting. More than 100 years of history, starting with drawings that fortunately can still be consulted at the moment, but which may not have been fully executed as drawn at the time. A grasp of photo material is understandable, but around 1900 photos were only taken sporadically. And what has stood the test of time is sometimes stored under names that don't seem logical at the moment. For example, under the name of the GP of the past. Of course we are talking about black and white photos, which makes reconstructing the color schemes used quite a challenge.
Nowadays, so-called “specifications” are drawn up, an often voluminous document that describes in text how a building should be constructed, which materials should be used, which colors should be used and sometimes even which tools should be used. But if specifications were already drawn up around 1900, it was a lot simpler in nature. In addition, the contractor and foreman on site had more space and freedom, and took them, in interpreting the construction documents.

In the same way, we have to figure out all the other aspects of the building. For example, the original color of the window frames. Because although they are currently white, they seem to have had a dark color in the early days. There, too, we research as much information as possible on which we then base our models and in this case offer the color options of the model.
All in all, a complex puzzle that makes us travel back and forth through time several times. But this means that we make well-founded choices, even when answers are sometimes well hidden in the details.

Finally.
Would you like to comment? Feel free to comment on forums such as the N rail forum or on our Markenburg Facebookpage. Or send us an E-mail, if there are any specific questions.

Searching on a specific scale is easy with the filter options on the main page of the Markenburg webshop. Scroll down and enter the desired scale at the bottom left. Then press "apply filter". 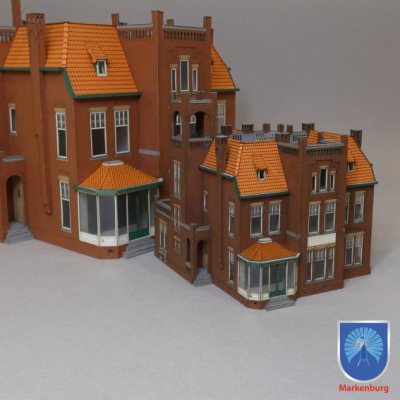 
A look at the front facade on the blueprint


The real deal in it's earlydays 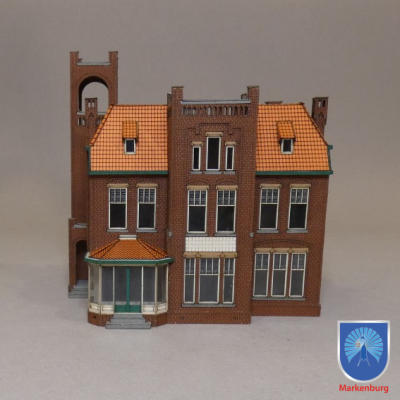