Search often and sometimes find.
At Markenburg we spend quite a lot of time actively looking for gems that we can "scale" for in our range. But sometimes it's just a bit of luck, such as with the buildings of Bokvelden theme. Due to a diversion we arrived in new parts of the Noord Brabant town of Best, just north of Eindhoven. We passed a site that was once a clog factory, but has since been transformed into a built-up environment suitable for the 21st century. Offices and homes were built and although it was all not finished yet, we already saw positive signs. Because, as we know ourselves, we have to take various things into account if we want to successfully imitate objects from reality in miniature. In the case of offices, this is, among other things, the floor area that must be taken into account. After all, offices are not infrequently huge buildings, but a model builder usually prefers the station to play the leading role and not a random office building. For the Markenburg range we therefore looked for office buildings with an unmistakable office character, but also with a modest floor area. As we followed the diversion, we quickly saw that these offices under construction could become quite good candidates. That meant that we later went back to what used to be that construction site. The offices turned out very well for us, but it seemed to be an additional luck that houses in a similar style were also being built right next to the offices for which we came back. Then we just had to be patient for a while until the houses were almost all ready. And indeed they also turned out to have a nice potential to imitate in miniature.

A fitting name for the new theme.
Then get to work. Request drawings, take many photos and ensure that we receive all other information. And meanwhile, we are pondering whether these objects fit into an existing theme or whether it would be better if they had their own theme. It has become the latter, which of course means that the new theme must be given a name. We needed a modern-sounding street name that fits the buildings of the theme. Now you would expect that the actual street name by definition provides a solution, but that went awry in this case. After all, there was originally a clog factory on this location and although its chimney has remained on the site as a monument, only the new street name refers to history. But in an adjacent residential area that is not much older than the buildings we were developing, we did find an interesting street name. Then a search is made to see whether that name and similar names also occur in other places and whether similar buildings are also present in those other places. So that what the theme name should be provides a logical reference for many.

Many variations in serial construction.
Also the substantive elaboration of making the drawings was not as easy as it might seem at first glance. Since about 1960 we are all familiar with serial housing. Then mostly the “doorzon homes”, which were literally copied in rows and then again with many rows at the same time would form a neighborhood. If there were already mirrored houses among them, that was already a lot in terms of variation. Today, consumers are no longer satisfied with that. Those neighborhoods with exactly the same houses in hundreds are sometimes experienced as boring and impersonal. Some people even have difficulties with orientation in such neighborhoods. But since the 1990s, little by little an increasingly powerful tool has emerged to make serial less boring. Indeed, the computer with ever more powerful software on it. This makes it possible to apply increasingly complex variation with relatively little effort. And this is also reflected in contemporary architectural designs. Because if we look at the row of 9 houses that served as a model for the houses in the Bokvelden theme, we see that not one is exactly the same as the other. If you take a quick look, you will see two-storey blocks in a light color and 1-storey blocks in a dark color. But if you look longer, you will see that those blocks are not in 1 line. The building line jumps per light-colored block and then the dark-colored blocks are not equally far back everywhere. And then to think that those dark colored blocks are not all the same length. If you look even more closely, you will see that the front doors are all the same, but that the same front doors are not all equally far from the front in the side walls. None of these are mistakes or imperfections, but they are tightly planned variations on the theme. This creates unity at first sight and personalization for those who value it most, namely the residents. In any case, we are happy to take up the task of reproducing these designs as best as possible on a small scale and where our customers can determine whether we actually succeed in doing so.

Next.
We are already busy with projects that we hope to be able to introduce to you soon, but nevertheless we would of course like to hear what you think of this new addition to our range.
Feel free to let us know on the forums or on our Facebook page


Searching on a specific scale is easy with the filter options on the main page of the Markenburg webshop. Scroll down and enter the desired scale at the bottom left. Then press "apply filter". 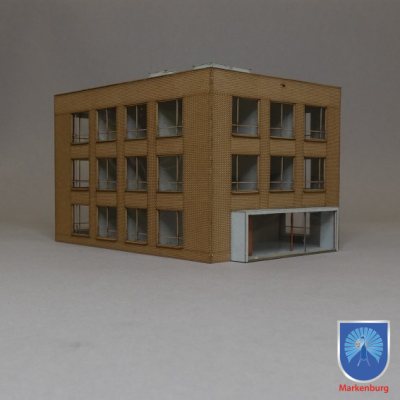 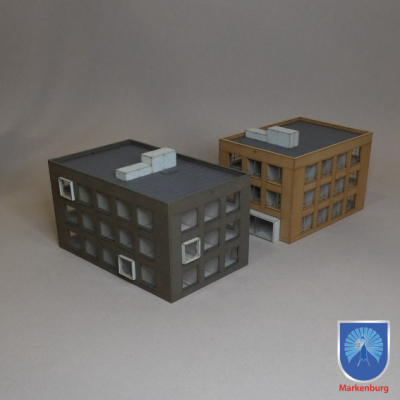