The month of buildings.
In the first month of this new year we were able to introduced Steenweg 115 to you.
To whom that has passed in a nutshell the following: Steenweg 115 is a beautiful building built in 1910.
It housed a prominent steam shoe factory, where the word steam referred to the drive method of the machines of that time. That time is now well behind us, which also applies to the time when the large-scale production of shoes still took place on Dutch soil. Yet the building survived those times. At least, the facade.
Because around 2010 it was decided to demolish the factory buildings, with the exception of this characteristic facade. The site now offers space for a series of apartment buildings, one of which bears the original façade that once belonged to Waalwijk's highest shoe factory.
More information about Steenweg 115 can of course be found on the product page of Steenweg 115 .

More platforms.
For February we have news about the modular platform segments.
Naturally, at Markenburg we already have the necessary themes full of platform segments. And as many already know, the themes are in fact sorted according to the width of the platform segments. Those who would like to find out more about this can download the Explanation modular platforms . We can say that it will pay to go through those few pages.
However, the same explanation also refers to D width platforms. With 11cm in scale 1:160 (N) or 20.2cm in scale 1:87 (H0) respectively, the widest in the entire series.
Converted to reality, we are talking about a width of more than 17.5 meters. A width that can also be found in reality. For example, the fanning out island platform of Venlo reaches 17.5 meters on the east side of it. In places such as Geldermalsen and Deventer we find island platforms that over most of the length even exceed 17.5 meters in width.
And in places such as Amersfoort, The Hague Hollandsspoor and Haarlem, widths are even reached that exceed 20 meters. Prorail ("The Dutch rail infrastructure manager") is researching the benefits of wide platforms. The underlying idea is that if people can get on and off the train faster without getting stuck on a crowded platform, the train can continue on its way to the next destination more quickly.
A nice subject, although perhaps less important for modellers. But also from an architectural point of view we see interesting things happening at the widest gradation of platforms. For example, in this category we see much more often the combination with dead-end tracks and dead-end platform tracks. But combinations with buildings such as fully-fledged waiting areas, cafeterias, signal boxes and complete station buildings are also much more common.
At Markenburg we have known for quite some time a variety of platforms and also various station buildings and although many modellers manage to create the most beautiful combinations, a question that recurs now and then is how the station building can be placed at platform height. And that is exactly one of the additional possibilities of our new D width platform segments. 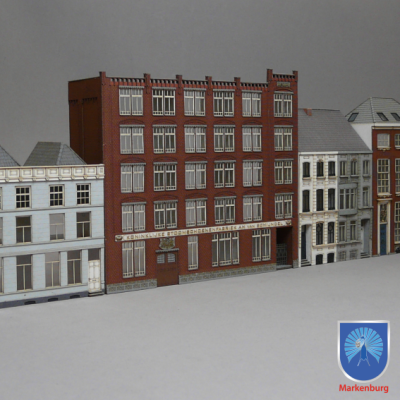 Steenweg 115, accompanied by other Steenweg buildings