Introduction theme Adamshoflaan.
The Markenburg themes all have their own background. It also follows from this background what does or does not fit in such a theme. In addition, the themes serve to ensure that the more than 500 Markenburg products are categorized in a practical and appealing way.
With a new theme about to be introduced to you, there is also a unique background to it, which we are happy to share here.

We are talking about the period around 1900, in what was then still an outlying area between the towns of Rotterdam and Kralingen. About 300 meters from the Maas terminal station. The Adamshofslaan has been known for more than 100 years as a relatively wide and more than 600 meters long connection between the Oostzeedijk and the Oudedijk. Located in a rural area and connecting a few homes, but especially the beds that we would now describe as vegetable gardens or allotments.
This environment changed greatly around the turn of the century. Rotterdam expanded considerably in all directions, just like all other major Dutch cities at that time, and so also up to Kralingen. An important detail is that the Housing Act was developed in 1901. Before that there was no legislation at all about housing, which turned out badly, especially for the less fortunate. Slums, over habitation and a total lack of hygiene became increasingly common until 1901. And that led to dangers for all city dwellers, such as diseases, uncontrollable fires and such discontent that riots were also lurking. The new Housing Act had to put an end to the bad conditions, but that cost a lot of space, which is one of the reasons why the cities grew in size so fast. The buildings that arose in the vicinity of the Adamshoflaan were erected between 1903 and about 1915. The buildings were built for a mixed public, although the main part ultimately consisted of housing for the workers who had often newly arrived in the city. These workers' houses had to be built quickly and economically, but also comply with the new legislation. So when a first model was approved by the municipality, it was copied by numerous contractors. These were up- and downstairs apartments, suitable for 2 families, per building. At the time, families could consist of about 10 people. To illustrate, buildings of approximately 4 meters wide and 10 meters deep. Originally equipped inside with a front and back room, a hall and a staircase to the first floor where there were also a front and a back room. The first examples certainly did not have a real kitchen, and shower rooms were not installed in many homes until after 1965. Toilets were certainly in the beginning to be found in what later came to be called the backyards. This involved rows of wooden cubicles where a maximum of 20 people shared a cubicle. There was of course no connection to the sewer. And then to consider that this situation already constituted a substantial improvement on where people lived before 1901.
The overall result around 1915 was a total metamorphosis of the formerly rural area. Now there were long parallel streets, often oriented from north to south, which were flanked on both sides by rows of literally hundreds of the houses as described above. The Adamshoflaan was gradually renamed to Adamshofstraat. The newly created neighboring streets, where more middle-class people lived, were more spacious and contained more beautiful architecture. Yet the architecture of the workers' houses was not bad. Certainly for that time a sound construction to start with, and neatly detailed in for example, the masonry, sometimes plaster, and the woodwork. The detailing was not tied by law, which means that anyone who looks and compares the houses more closely will discover numerous differences per set of buildings. Now more than 100 years further in time, we also know non-original differences in detail, such as changed front doors and window frames and up- and downstairs apartments that have been merged into 1 house.
The attentive reader realizes that we have just skipped an important and defining moment in Rotterdam's history. The day of May 14, 1940, in which around half past one in the afternoon, in 15 minutes, about 30,000 homes and other buildings were razed to the ground. The fires caused by the bombardment raged for days. The area around Adamfshofstraat is also being hit hard. The fire boundary, as it has meanwhile been drawn and called, meanders through the Kralingen district, with the result that the long streets of contiguous buildings are now interrupted in many places. If you take the time on site, you can read the scars in the urban fabric to this day. Reconstruction of buildings has partly filled the gaps between the pre-war buildings since 1946, although the majority of these new buildings date from the 1950s. In some cases, even the reconstructed buildings have already been replaced by buildings from the 1990s and beyond. All this has led to a neighborhood that clearly still radiates the period from around 1900, but has already experienced a lot. Scars are often repaired, sometimes professionally, sometimes more pragmatically, but often immediately adapted to the wishes of the contemporary age. All in all, the current situation provides an extremely interesting, multiform and now also complex picture of the urban fabric. Despite the fact that many streets were initially so monotonous. Meanwhile, the current derivative of the Adamshoflaan still runs like an unsurpassed thread through the urban fabric.

With the Markenburg theme Adamshoflaan, we will try to do justice to the full complexity of the urban environment. The start will be made with the well-known workers' houses, but other objects present in the district are also planned to be developed. We also see possibilities in semi-relief and full-relief buildings. Perhaps both will have a place in this theme in due course.

Finally.
Would you like to comment? Feel free to comment on forums such as the N rail forum or on our Markenburg Facebookpage. Or send us an E-mail, if there are any specific questions.

Searching on a specific scale is easy with the filter options on the main page of the Markenburg webshop. Scroll down and enter the desired scale at the bottom left. Then press "apply filter". 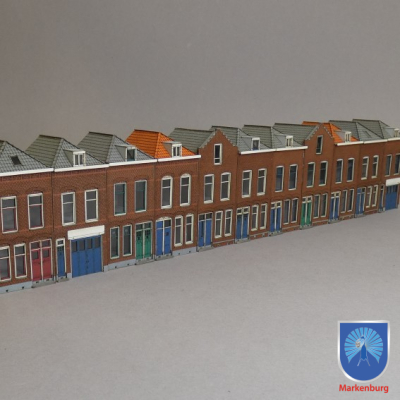 
A look at the great example


The current neighborhood from the air, long streets with interruptions of various kinds 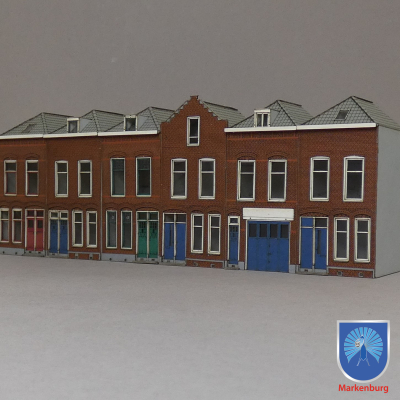