Platform canopies.
It's all about the experience and comfort. Even if we have to wait for the train. This was already understood around 1850, when the first platform roofs were built. Since that time, an endless number of different models and variants have been built and often also dismantled.
Yet there is a system in it. The narrowest platforms usually have no shelter. Simply because there is no room for it physically and the small number of travelers does not justify this. Slightly wider platforms have shelters or the more contemporary "Abri's" mainly consisting of glass. And when a platform becomes a bit wider and busier, the platform canopies on T uprights are a practical choice. The underlying design philosophy for these canopies is simple and effective: Keep the platform edges free of obstacles, so that it is easy to get on and off the trains. This means that the platform roof can only be supported in the centre axis of the platform by one row of sturdy columns. This quickly creates a series of T uprights that keep the roof upright. And since it is subject to considerable forces, around 1900 only one material was considered suitable for this main construction. The hand-riveted steel was fastened together plate by plate until the arms on the uprights reached towards the edges of the platform. Although partly truss based constructions could still be reasonably aligned, the slimmer variants of the T uprights proved more difficult to make identical. The result was an excellent functional roof, which turned out not to be completely straight, especially along the long sides of the roof edge. Another challenge turned out to be staying dry in inclement and windy weather. The relatively narrow canopies provided an excellent shelter from precipitation, until the wind literally blew it underneath. This is how the windshields were soon created, which were often equipped with benches. No matter how the wind blew, there was always one side where one could wait reasonably dry and sheltered.

Build details.
Despite all the differences, there are also similarities, especially in the main outlines. The canopies built on T uprights between about 1880 and about 1950 usually consist of a hand-riveted steel construction, sometimes partly truss based in their arms. The gable roof shape was more common for partly truss based arms, while a V-shaped roof surface was more often chosen for the slimmer T uprights. The V-shaped roof had the advantage that the precipitation on the roof was collected in the middle in a gutter and discharged via a downspout. For example, the water did not run off the edge of the roof “uncontrollably”, whereby the passenger was sometimes adversely surprised by a splash of water when getting on or off the train.
Usually I beams were placed between the T uprights themselves, whereby the center beam / ridge beam was sometimes extra elegantly detailed. After all, material was more expensive than the hours of the craftsmen, so lavish detailing was also justifiable from a cost point of view. Although sometimes a subdivision of purlins was made, depending, among other things, on the distance between the T uprights, they always ended up with a roof board consisting of wooden planks. Interestingly enough, the roof boarding was almost always painted white on the underside, possible to achieve a more spatial effect for the waiting traveler. Roofing felt was usually placed on the roof boarding. And in most cases, special attention was paid to a relatively close connection between the rolling stock of the time and the roof edge at the platform edge. Here too, to keep the comfort level during those few seconds of getting in and out.
The more modern canopies on T uprights consist of modern materials with different properties. And that, together with a different way of thinking in these new times, leads to different constructions. The hand-riveted steel makes way for rolled H and I profiles. These are much less labor-intensive to assemble and also more rigid due to the improved material properties. In this way the uprights can be set a little further apart, the mutual alignment can be made tighter and the subdivision of purlins can remain somewhat coarser. Another big difference is the lack of wooden roof boards in today's roofs. Now that corrugated sheets or even aluminum sheet pile profiles are used as roofing, instead of the roofing felt, good even support is no longer necessary. The construction speed increases considerably with this. And since hourly rates in modern times guarantee most of the cost, faster construction is very attractive. On the other hand, the experience of the traveler is more difficult to express in monetary terms and sometimes seems to be taken into account less.

The example.
The platform roofs on T uprights have been used throughout Europe. Numerous examples can be found in Belgium, the Netherlands, England and Germany, often also in active service. This time Markenburg used an example in Ghent (B) for the model, the basis of which has already been built around 1912. If you look at this example around 2020, you will not only see the traditional roofs, but also the signs of modern additions, changes and repairs. Not to forget, parts have now also been demolished to make way for an entirely new roof. In fact, many facets are situated at one location, whereby what strikes us most is what could be made with limited resources and now more than 100 years ago. Nevertheless, there are also beautiful examples of platform roofs on T uprights in the Netherlands. Such as at Assen, Hengelo, Naarden-Bussum and Dordrecht stations. In Dordrecht there are two versions. The old ones, built of riveted steel and with truss based arms, which are usually experienced as graceful. And the modern, more functional-looking variant made of rolled H profiles. However the execution may be, the design philosophy remains the same.


News in 1:220.
There is also news this month in the smallest scale supported by Markenburg. Heistraat 40 increases the possibilities here from now on. In reality, the building originally had a commercial space in the front and people lived behind and above. Times change and so do the function of the building. That has now been completely transferred to commercial space. In reality, several companies have already made grateful use of the space and that is why we also supply various signage at Markenburg. This also creates a wide choice of retail and related options in scale 1: 220. 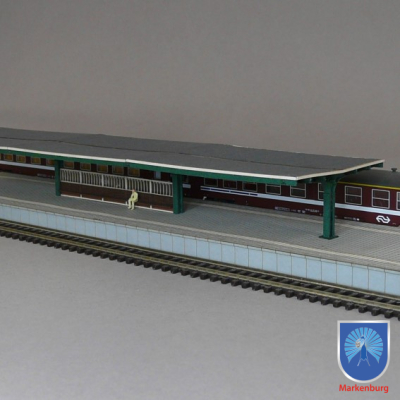 
Example in Ghent (B), with wavy roof edge 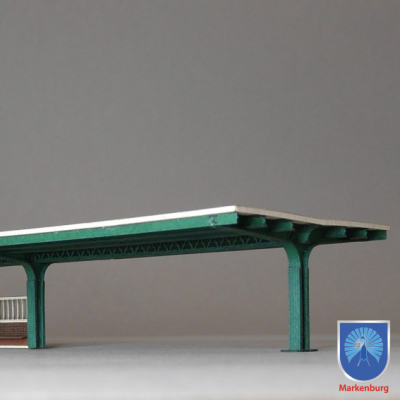 
Literal cross-section of the platform roof, during the phased demolition 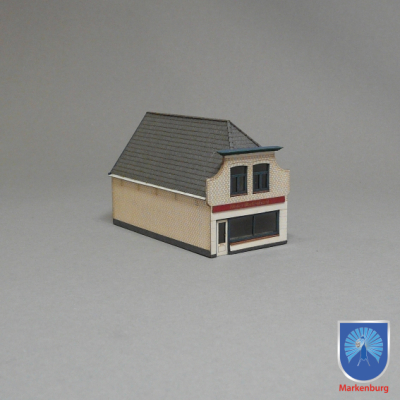