With the cokes room now in the Markenburg product range, building cluster 5 of the Eindhoven gas factory is almost complete.

The cokes room was an important building in the extraction of city gas. After the coal had been stored on the site in a coal bunker or coal shed, they were heated in this area without oxygen. In this process, various gases rise and are collected in pipes and collecting tubes. These gases were taken to the (5a) purification house. The coke, waste product in the gas extraction process, was transported to the steel mill.

The cokes room building is easily recognizable by the interrupted saddle roof. The roof sections deliberately do not connect with each other so that the excessive heat and smoke could escape through the roof. The same principle was applied in the ridge of large multi platform roofs, in order to let smoke from steam locomotives escape. This construction can still be seen in the platform rooftops at Amsterdam CS (the Netherlands).

The NRE site in Eindhoven had several building clusters. The clusters were numbered and the buildings that were part of a cluster were given a letter. This coding is included in the names of the Markenburg products. The image in the lower right also shows the coding in the blue shields.

Cluster 5 was the heart of the gas factory, good for the generation and purification of city gas. With the exception of the small switch room, Markenburg has all the buildings that belong to this cluster. And the switch room is now also on the Markenburg drawing board.

Cluster 8 is also available at Markenburg. These two buildings provided energy for a long time on the site. Both cluster 5 and 8 can still be seen near the Nachtegaallaan in Eindhoven (the Netherlands). Given the monument status, work is currently being done, providing the real buildings a second life. The gas holders did not make it to the monument status and were demolished decades ago. 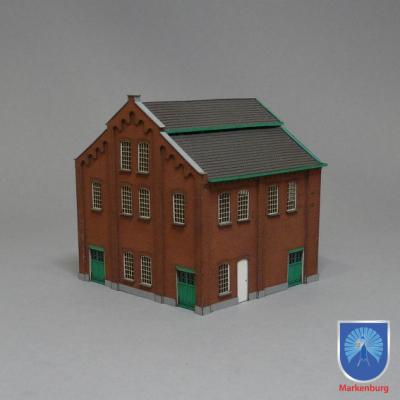